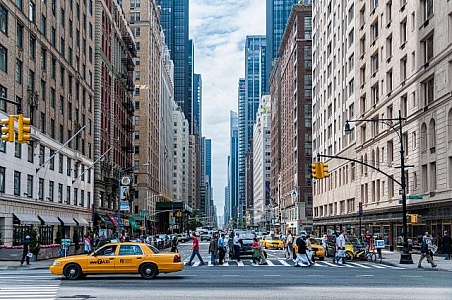 Watching someone walk across the street might seem about as exciting as watching this. Yet way back in the day, pedestrianism was a very popular spectator sport. In 1809, about 10,000 people were on hand to see a Scotsman walk a mile an hour for 1,000 hours. Today, almost no one pays money to see people walk. Some people might pay to watch people jostle for position at the Bowling Green MTA station, which is near my office. But that’s the subject of another blog.

Today’s pedestrians face many more dangers than they did back in the day. Today’s vehicles are much bigger and faster than ever before. Furthermore, most streets and highways weren’t designed with pedestrian traffic in mind. Most streets have wide lanes and short red lights, making them difficult to cross safely. So, the pedestrian death rate is alarmingly high. If you or a loved one was hurt or killed in a pedestrian accident, a New York personal injury attorney can obtain the compensation you need and deserve.

In a word, no. But, things didn’t start out that way. For several years under New York City’s Vision Zero, a plan to end fatal car and pedestrian crashes in the Big Apple, the number of pedestrian deaths in New York City dropped, and dropped sharply. Tangible changes, like lower speed limits, made a big difference. Intangible changes, like increasing awareness of pedestrians on the road, made a bigger difference.

Then coronavirus hit, and everything changed. During COVID lockdowns, many drivers let their guard down. They developed bad habits, like speeding and driving drunk. Furthermore, traffic enforcement dropped off to almost nothing. Therefore, drivers knew they could get away with it.

In general, bad habits are easy to form and difficult to break. So, the number of traffic fatalities went up drastically in 2020 and 2021. So far, it looks like 2022 may see an even bigger increase.

The idea behind Vision Zero was not misplaced. Excessive speed and poor visibility cause most of the pedestrian accidents in New York.

Speed multiples the force in a collision between two objects, according to Newton’s Second Law of Motion. This effect is especially clear in pedestrian-on-vehicle collisions. At impact speeds under 25mph, the pedestrian death rate in these incidents is only 10 percent. The fatality rate catapults to 90 percent at 55mph or greater impact speeds.

Vision Zero’s plan would reduce the speed limit to 25mph on most urban roads and streets. That reduction makes sense, given the above statistics. But many drivers oppose such reductions. Their opposition also makes sense, since many New Yorkers have extremely long commutes. So, this part of Vision Zero might never become real.

Usually, fast-moving objects, like a changing light or a zooming car, draw drivers’ attention. Pedestrians are small and slow. Therefore, drivers often don’t notice them, especially if they aren’t walking in a herd. Improved crosswalks could ease this problem. Virtual crosswalks that feature flashing yellow lights are a good example.
In this area, the issue is often cost. Each virtual crosswalk costs about $100,000. Considering the number of intersections in New York City, that’s a lot of money the city doesn’t have. Additionally, the construction delays irritate motorists who, as mentioned above, aren’t very pedestrian-friendly to begin with.

How much money will I get?

Woah, you just asked a really big question. To break it down, let’s talk about the difference between settlement with a lawyer and a settlement without a lawyer.

The asking price for a used couch is pretty easy to establish. The price usually depends on the sofa’s condition and the seller’s motivation. A civil claim’s settlement value is much harder to establish. That’s especially true early in the process, when insurance company defenses often aren’t too clear. A lawyer has the necessary skills. A nonlawyer must feel around in the dark.

Speaking of legal doctrines, New York’s complex collateral source rule often comes into play during settlement negotiations. Only a lawyer knows how this rule works and can make it work for you.

Assume Harry hits Sally as she’s crossing the street. Sally’s medical bills are $50,000. An insurance company adjuster offers her $51,000. She takes the offer, since she gets her medical bills paid and has enough left over for a weekend at the Jersey shore.

Now Assume Sally partners with a New York personal injury attorney who sets a fair settlement value for her case. Based on the facts and some other variables, that settlement value might be $125,000. Additionally, Sally’s lawyer convinces her doctor to reduce her medical bills to $30,000. That’s where the collateral source rule comes in.

The insurance company offers $60,000, or roughly half of the settlement amount. That sounds like a bad deal for Sally, especially since her lawyer gets a third of the settlement. But let’s do the math. If she works with a lawyer, Sally ends up with $10,000 (60k minus the legal fee minus her reduced medical bills). Instead of settling for a long weekend, Sally truly has the money to put her life back together.

When will I get my settlement check?

The settlement process is obviously complex and often time-consuming. Additionally, if a claim settles too quickly, an injured pedestrian might not receive maximum compensation. The best evidence often isn’t available and the insurance company usually isn’t motivated to settle. So, if a claim settles quickly, that’s usually a bad sign for a victim. Typically, the lawyer took the easy way out.

Claims that settle later, during mediation, are often much better, from a financial standpoint, for victims. During a lawsuit’s discovery process, attorneys obtain additional evidence and learn more about insurance company defenses. Additionally, the closer the trial date comes, the more the insurance company wants to settle. Plaintiffs have a very high winning percentage in these matters.
Pedestrian accident victims are usually entitled to substantial compensation. For a free consultation with an experienced personal injury attorney in New York, contact the Pianko Law Group, PLLC. Virtual, home, and hospital visits are available.