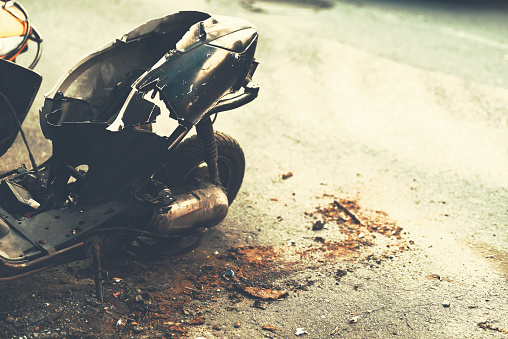 One driver is in custody, and police are still looking for the other driver, in a pair of Manhattan hit-and-runs that happened about five blocks apart and five minutes apart.

Few details were available about the first wreck. A black Mercedes hit a woman near the corner of West 202nd and Ninth. First responders rushed her to Harlem Hospital in critical condition. That driver is still at large.

At about the same time, a different Mercedes rear-ended a motorcycle, which was carrying two people, near the corner of West 207th and Ninth Avenue. One victim hit the pavement and another victim went through the Mercedes’ windshield. Police arrested the 23-year-old Mercedes driver a short distance away from the crash scene. Doctors say the rider has a seriously-injured spine and may be paralyzed from the waist down.

Neither victim was wearing a helmet at the time of the wreck.

Vehicle collision injuries are almost always very serious. Today’s cars and trucks are so big and so fast that no safety system, no matter how advanced, can contain all the force in such wrecks.

Injuries are usually worse among motorcycle riders and pedestrians. Seat belts, airbags, and other safety systems protect vehicle occupants. Pedestrians and motorcycle riders have nothing. Therefore, they often sustain injuries like:

These injuries, such as the pain of a road burn, the discomfort of a broken bone, and constant headaches, often prompt victims to use powerful prescription pain pills. These pills are often stronger, and more dangerous, than morphine or even heroin. Addiction causes a number of serious and often fatal injuries. But that’s the subject of another blog.

New York is one of the only states that still has a universal helmet law. The law may require motorcycle riders to wear helmets, and that’s probably a good thing. However, the failure to wear a helmet doesn’t torpedo a claim for compensation. New York law is extremely complex on this point.

Comparative fault is basically a percentage analysis. After jurors hear all the facts, they must divide fault on a percentage basis. Then, since New York is a pure comparative fault state, the judge adjusts damages accordingly. If Alice hits Brenda, Brenda’s damages are $100,000, and they’re each 50 percent at fault, Brenda gets $50,000. Easy peasy lemon squeezy.

The amount of damages is more complex. If Alice hits Brenda, who wasn’t wearing a motorcycle helmet, the insurance company must prove that Brenda’s failure to wear a helmet, as opposed to Alice’s negligence, substantially caused Brenda’s head injury.

As mentioned, motion usually causes head injuries. Pacing helps many people think more clearly and feel more awake. That’s because, with each step, their brains tap their skulls. A car crash or hard fall greatly multiplies that impact. The brain slams against the skull, causing permanent injury instead of temporary stimulation.

The bottom line is that, helmet or no helmet, motorcycle wrecks often cause head injuries. Additionally, motorcycle helmets do nothing to protect victims against the other injuries mentioned above. So, a New York personal injury attorney can usually overcome the helmet defense and obtain maximum compensation.

Usually, all this legal mumbo-jumbo means little or nothing unless a New York personal injury attorney locates the tortfeasor (negligent driver) and holds this person accountable in court.

Hit-and-run victims who count on police investigators to do this work are almost always sorely disappointed. Criminal investigators only solve about 10 percent of hit-and-run cases. If the defendant goes to jail, which usually happens, very limited compensation is available, usually through a crime victim compensation fund.

Personal injury attorneys, on the other hand, solve almost all hit-and-run cases. That’s primarily because the burden of proof (a preponderance of the evidence, or more likely than not) is so much lower in civil court.

Assume a witness sees a black sedan run over Jim in an intersection. A few blocks away and a few minutes later, a traffic camera captures an image of a black sedan with front-end damage. The camera records the license plate number but not the driver’s face.

This evidence wouldn’t hold up in criminal court. There are about a zillion black sedans with front-end damage roving around New York City. Even if prosecutors show the two cars were the same, and that’s a very big “if,” there’s no evidence as to who was behind the wheel. So it’s still no dice.

Injury victims need and deserve substantial compensation. For a free consultation with an experienced personal injury attorney in New York, contact the Pianko Law Group, PLLC. We do not charge upfront legal fees in these matters.